We are all used to seeing satellite images of hurricanes - that characteristic swirling mass of cloud with the perfectly round eye at the center. Most of the time, these are traditional optical satellite images, which have vastly improved in resolution during the last decade.

Despite the improvements in resolution, such optical images are not able to show us what is happening at night, or how a change in wind direction or collapse of the eyewall can shift the track of a major storm, having significant landfall implications.

By contrast, synthetic aperture radar technology (SAR) can provide us with reliable situational awareness about what is happening, day or night, through clouds, smoke, and electricity blackouts - whatever the conditions on the ground.

See Through CLOUDS and NIGHT SKIES WITH SAR

Recent innovations in remote sensing and earth observation technology have an enormous potential to improve existing insurance processes and open new markets for (re)insurers. This is why ICEYE’s SAR observations of Hurricane Ian in September 2022 were so valuable to multiple agencies as the storm unfolded. Without them, we would have literally been in the dark.

Hurricane Ian was one of the costliest US catastrophe events on record, with projections that the storm could cost insurers up to $57 billion and the National Flood Insurance Program up to $10 billion. It has been described as Southwest Florida's 'Hurricane Andrew', another reminder that a monster event can occur in an otherwise relatively quiet North Atlantic storm season.

ICEYE began monitoring Ian on 23 September 2022, with our SAR satellites tracking the storm as it moved across the Caribbean, making the first landfall on the western part of Cuba.

When the hurricane began barreling towards the southwest coast of Florida overnight on Tuesday, 27 September, and into the early morning of Wednesday, 28 September, our SAR data really showed its worth. We posted regular status updates on our Twitter channel and informed our key stakeholders - including disaster response agencies and insurers - on where the storm was heading and what to expect.

We could see Ian was intensifying and taking a more southerly path than initially forecast and where the most threatening storm surge was likely to be. Our overnight images captured some striking patterns on the sea surface caused by the strength of the winds. Despite glancing off the Keys, we saw the impact of the storm surge in Key West - at just over 3 feet - and water draining from Tampa Bay as Ian approached, feeding the storm and its 6-foot surge as it drew closer. When landfall was imminent, we warned that Naples to Fort Myers Beach was set for a direct hit.

As Ian spread slowly northward, we began tracking coastal and inland flooding into Central Florida and South Carolina, where the hurricane made a third landfall.

As a slow-moving, wet storm, it was clear from the outset that the flood damage would be extensive. From an insurance perspective, this had significant claims implications. While most Florida properties are covered for wind damage, only a fraction of them has flood insurance coverage.

Our insurance partners were, therefore, keen to have as clear a picture as possible of the extent and depth of flood waters, both coastal and inland. And crucially, they wanted to understand which properties had been affected and where it was safe to deploy field assessors once the hurricane had passed over and waters receded.

Within 24 hours, our Flood Operations Team produced an initial flood extent and depth analysis for our clients. After closely monitoring the situation for days, our last acquisition occurred on 5 October 2022, with our fifth data release revealing a total of 216,915 properties affected by floods across the Sunshine State, over 2,000 of which had been hit by flood waters of around 8 feet. Download the latest release of our Hurricane Ian Flood Briefing

ICEYE's flood extent and depth data was crucial information as Hurricane Ian unfolded, offering a new level of situational awareness to government agencies as they coordinated relief efforts and to our insurance clients as they determined how and where to deploy their resources and updated their stakeholders on expected losses.

Our feedback to date is that these insights were invaluable, empowering quick and informed decisions to be made during a crisis, avoiding delays in emergency response, and prioritizing health and safety. Having that critical and reliable observation data via remote sensing meant our stakeholders could immediately reach out to those individuals and business owners impacted, offering reassurance that they would do everything to get them back on their feet as quickly as possible. Get your free copy of our eBook: Rapid Disaster Response in the era of climate change

As Rafal Modrzewski, our CEO explains in our new eBook on disaster response, the mix of ICEYE's unique satellite data, analytical capabilities, artificial intelligence, and machine learning are a game-changer in how we respond to natural catastrophes, enabling better communication, more efficient claims management, and support to customers when they need it most. By doing so, we are building more resilient societies to major events like Hurricane Ian.

If you are interested, we encourage you to learn more about ICEYE’s Flood Monitoring solution or download our latest Flood Briefings here. 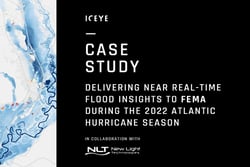 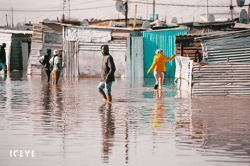 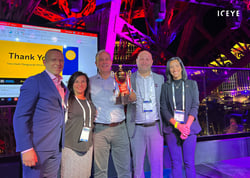 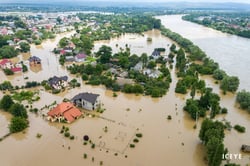