How to Address Illegal Fishing in Asia with Actionable Satellite Data

As the current methods for detecting, monitoring and acting on suspicious fishing activity are limited, new radar satellite technologies will provide a much needed missing piece of the puzzle.

Illegal fishing is a global problem with serious financial and environmental consequences. According to Nature, in some regions, such as the western and central Pacific Ocean, illegally caught fish may constitute up to 30% of the total catch.

Asian countries are surrounded by globally remarkable and versatile sea ecosystems. The overall sea areas reach out from the vast Indian Ocean, to South China sea, and to the even larger Pacific Ocean, incorporating numerous peninsulas, islands and smaller seas. The fisheries in these areas are world-famous, and the lack of efficient monitoring systems results in large-scale illegal fishing.

Monitoring of Illegal Fishing is a Challenge – Especially in Asia

The fishing industry plays a major role in Asian economies, and influences the daily lives of millions and millions of people. As much as one third of the global fish production takes place in Asia. The fishing industry offers work and provides an important animal protein source for a vast number of people. Japan, China and Korea are some of the greatest consumers of seafood around the world.

It is clear that overfishing represents a major threat to the economy and the welfare of citizens in Asian countries. The fisheries in question are not used by local fishing fleets exclusively – especially the more sparse and therefore valuable catch are also sought after by fishers from far and wide, legally or illegally.

As an example of the impact on a global scale, FAO (Food and Agriculture Organization of the United Nations), has reported that worldwide IUU fishing represents up to 26 million tonnes of fish caught annually, valued at USD 10 to USD 23 billion.

In some regions, such as the western and central Pacific Ocean, up to 30% of the total catch is estimated to be illegal, unreported and unregulated (IUU) fishing.

The fight against illegal fishing requires cooperation on both national and international levels. The unfortunate fact is that presently there are gaps in the availability, reliability, and quality of information from wide sea areas to curb this issue sufficiently.

The current solutions for monitoring illegal fishing consist of systems such as coastal radars, supported by information from AIS (Automatic Identification System) and VMS (Vessel Management Service) systems. In addition, official monitoring activities done at sea by vessels, helicopters, and airplanes are used. The vast coastlines in Asia and the small size of many fishing vessels make these tasks enormously difficult to manage.

The efficiency of sea traffic monitoring can be improved by developing solutions that combine specific information from multiple sources and enable the detection and cross-checking of patterns of interest. An example of this would be the classification of vessels that try to hide their illegal intentions by turning off their own tracking systems.

The key to making this information actionable is high-speed data access and timely analysis.

There are several organisations in the world who have previously launched radar imaging satellites, which are excellent tools in acquiring this much needed imaging with very high degrees of reliability. These satellites enable you to image locations of interest even through clouds, and even without sunlight during the night.

The issue with this solution has long been that these satellite units have been extremely large and expensive to launch, limiting their availability.

ICEYE launched in 2018 the world's first two small radar imaging satellites (under 100 kg). This achievement in miniaturizing SAR (synthetic-aperture radar) satellites provides huge opportunities for detecting illegal fishing activity of large sea areas in near real time. With the lower mass, ICEYE is launching dozens of satellites rather than just a couple.

This new development enables creating solutions to combat illegal fishing, that are based on a comprehensive constellation of small radar satellites and built-to-purpose analysis solutions. More satellites means significantly better revisit rates for imaging specific locations. The advantages of frequent satellite imaging lie in the improved reliability and timeliness of the acquired sea traffic monitoring data.

Using Satellite Radar Data in the Detection of Illegal Fishing

SAR technology is perfect for applications where vessels need to be detected at sea. The constellation of ICEYE satellites is planned to provide imaging from locations of interest at an excellent regularity and speed due to the sheer amount of launched satellites.

One radar satellite image can cover thousands of square kilometers at once, and even smaller-sized vessels can be effectively detected.

The high frequency in satellite revisits over selected areas, and the accuracy of the SAR satellite images provide a reliable basis for analysis.

Extended benefits are gained when preventative measures towards stopping illegal fishing can be focused only on suspected vessels rather than huge areas at random. This kind of identifiable suspicious activity can involve, for instance, a vessel turning off its AIS system or transshipping, i.e. transferring the catch from smaller vessels to a larger one.

With the help of algorithms and machine learning aimed to track suspicious patterns, locations of suspected vessels can be delivered directly to the relevant authorities’ systems, making it possible for them to take active measures while suspected illegal fishing activities are still ongoing, and the vessels are still within reach.

ICEYE SAR satellite data, acquired regardless of cloud cover and darkness, helps maritime authorities, organisations and industries to advance their coastline and sea monitoring. An optimal timely SAR data flow and integrations with other information sources and customer processes enable to enhance maritime situational awareness and to make data-driven decisions. 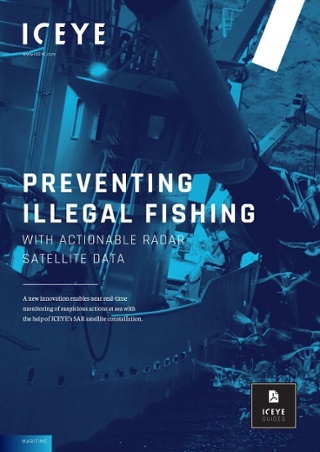