Fast access to radar satellite imaging enables timely detection and validation of oil spills in open waters, thus creating opportunities for governments and national agencies to quickly respond to them.

The first example case, that will be introduced today, occurred on October 11th, 2019, when the crude oil tanker SABITI was damaged near Jeddah, a port city in Saudi Arabia. After the incident, the tanker continued moving, leaving behind a long trail of oil in the Red Sea.

This oil spill was detected with satellite imagery. A radar image taken with an ICEYE SAR satellite was publicly available a day after the incident, providing insights into the location and size of the oil spill. Likewise, ESA’s Copernicus Sentinel-1 and Sentinel-2 satellites provided publicly accessible imagery of the situation.

"#OilSpill in the Red Sea, leaked from #SABITI - oil tanker damaged on Friday near the Saudi port city of Jeddah. After explosion, the tanker started moving to the South, leaving a long trail behind it. ICEYE #SAR satellite image from 12 Oct, 00:30 AM UTC"

Although this oil spill was spotted quickly, a significant amount of oil pollution in the oceans stays unnoticed, directly or indirectly impacting the environment, economies as well as the health of living creatures, including humans. Hundreds of spills are likely to occur in open and coastal waters daily without appropriate mitigation since these incidents are not being monitored with the necessary frequency and coverage.

Oil leakages not only damage marine ecosystems and biodiversity, but they can also contaminate drinking water sources and constitute fire hazards that might result in negative impacts for people’s health.

To prevent severe aftermaths, local authorities need to be informed about the existence, location and extent of oil releases as early as possible.

Early notification enables governments and national agencies to plan and execute oil clean-up and recovery processes in a timely manner. Awareness of the situation and detailed information about oil releases allow quick and efficient decision-making on where the anti-pollution vessels should be sent, how many search and rescue ships are required, and what other actions should be taken for efficient mitigation of the environmental hazards and their aftermath.

However, the detection of oil spills in coastal and open waters is a challenging task that requires persistent monitoring of large sea areas. Patrol boats and coast guard vessels cannot guarantee daily coverage of open sea areas, making it practically impossible for the authorities to be aware of every oil pollution incident taking place within their maritime territories.

For this purpose, satellite data is an excellent tool that addresses these challenges. By enabling frequent coverage of coastal areas, satellites can deliver accurate information on potential oil leaks. This information can then be used for addressing them appropriately.

Not all satellites are capable of providing reliable data over large sea areas.

Synthetic Aperture Radar (SAR) satellites are a key instrument for oil spill detection and monitoring. Using radar satellite imaging, it is possible to detect features over water surfaces in most environmental conditions or time of day, regardless of cloud cover, and even during the night. SAR satellites deliver high-contrast images that allow effective detection and accurate measurement of oil spills.

Accurate information on the extent and location of oil releases enables authorities to understand the situation based on facts, fast. This helps in taking necessary measures for safely and efficiently mitigating the negative consequences that may otherwise follow.

In another example case that will be highlighted here, took place on June 20th, 2019, when oil leaked from a passing vessel in the Turku Archipelago, Finland, and was quickly detected with SAR.

Within the same day, enabled by dynamic tasking, flexible scheduling capabilities and a robust analytics process, ICEYE acquired a SAR image of the area at 19:36 UTC. This image was then made available for monitoring the oil spill, validating its extent at that moment in time, and for verifying the initial clean-up activities taking place, as seen in Figure 2.

ICEYE identified the vessels in this particular frame by combining its own SAR data with Automatic Identification System (AIS) information. The information extracted from the AIS showed that two search and rescue vessels, a law enforcement ship, and an anti-pollution vessel had been sent to the area. 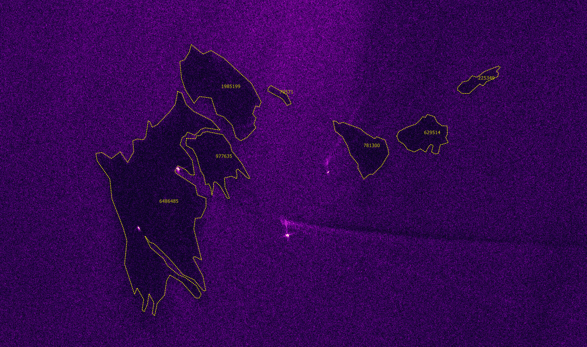 The Turku Archipelago oil spill case is an excellent example of how several data providers can join efforts to share valuable information and help governments and national agencies to address oil pollution issues on time.

Both the SABITI case and the Turku Archipelago oil spill demonstrate that radar satellite data can be used to assist governments and national maritime agencies in detecting oil releases early enough and taking timely clean-up measures.

Continue reading about how to improve the speed and efficiency of Your response on marine oil spills occurring in coastal and open waters with new radar satellite technology from the document below. 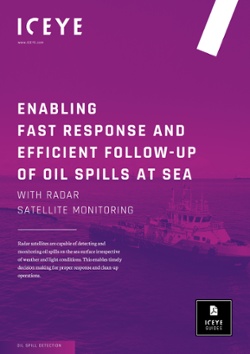