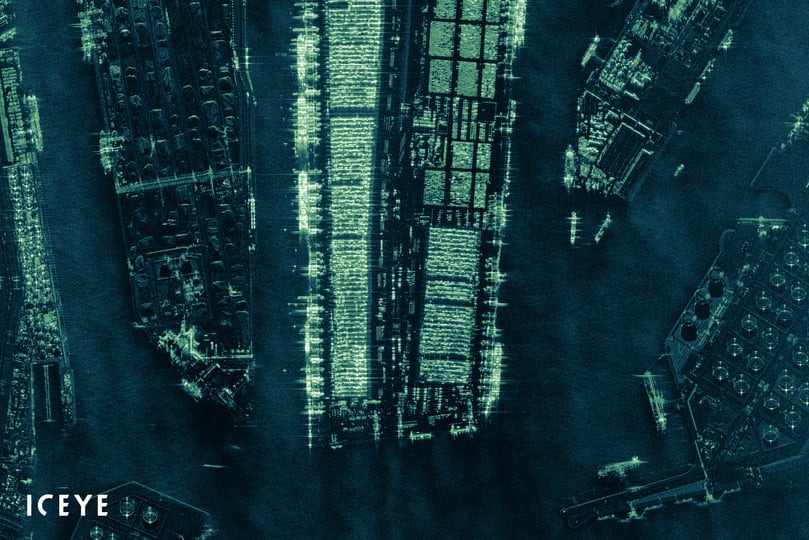 Helsinki, FINLAND – July 6, 2021 – ICEYE, the global leader in persistent monitoring with radar satellite imaging, announced today the achievement of Daily Coherent Ground Track Repeat (GTR) imaging with ICEYE radar satellites. This new, world-first capability enables detecting everything from large changes, such as monitoring if ships have moved, all the way to such detailed changes on-ground that a person on-site would not be able to recognize. The data enables performing Coherent Change Detection (CCD) every 24 hours, which has use cases in detailed monitoring of patterns of life, site activity, ground subsidence, infrastructure integrity, construction, and more.

ICEYE now provides the world’s most frequent coherent radar satellite data coverage to a selected initial set of customers. The capability is delivered to customers as daily imagery delivered from individual customer-selected locations. This newly demonstrated capability is expected to be available for a wider customer base in 2022, after the initial early access period.

“When you need to know what happens at a chosen location, you need the right technologies to acquire that information. ICEYE has spent the last three years actively pursuing this revolutionary capability for our customers, as it provides an unparalleled basis for performing change detection.” said Rafal Modrzewski, CEO and Co-founder of ICEYE. “This is a completely new level of performance. It enables four times more frequent persistent monitoring with radar satellites than has ever been available before.”

Coherence is a term given for the exact similarity between two radar satellite images. If a car has driven across a field, stockpiles have been adjusted, or forested areas have been cut down, these are seen as changes in the coherence between the chosen two images taken from different times of that location.

Daily imaging from ICEYE shows stockpiles being adjusted and transferred at the port of Rotterdam, with near-by cranes interacting with vessels.

The compelling advantage of ICEYE’s Daily Coherent GTR capability is that it allows quickly determining small changes at a location on a consistent daily basis. This type of persistent monitoring is intended for knowing exactly the level of activity at a chosen site. The Daily Coherent GTR capability is available either in very high resolution imaging for smaller areas, or wider area coverage at high resolution.

Radar satellite data acquired with this capability enables data users to perform interferometric and coherence analysis. The technical achievement is a result of a successful orbit adjustment of ICEYE’s satellites, which allow the same locations on Earth to be imaged from exactly the same orbit placement every 24 hours. It is the precision and repeatability of the imaging angles that enable ICEYE to deliver this new capability, in addition to the globally unique spacecraft design of ICEYE.

“The ability to image the same area at the same angle each day creates new opportunities for detecting daily changes that were not previously possible. By overlaying stacks of daily images, it is now possible to rapidly determine if objects have moved or entered the scene.” said Jerry Welsh, CEO of ICEYE US. “For example, we can monitor activities at a port and quickly identify changes, whether it’s commodities sitting on the docks or ships in the harbor. We have previewed this technology with some of our U.S. customers and the response has been amazing.”

Daily imaging from ICEYE shows that cars are parked alongside a road in Rotterdam port during weekdays, but not on weekends.

Last week, ICEYE launched four more synthetic-aperture radar (SAR) satellites with SpaceX, bringing the total number of the company’s radar satellite missions launched to 14. One of the newest spacecraft is a next-generation demonstration mission, which is set to double the effective resolution of ICEYE’s proprietary imaging instrument, while the other three satellites are set to deliver data to customers with flight-proven technology after commissioning is finalized. 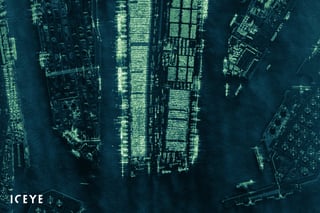 “A radar satellite image of the largest seaport in Europe - Port of Rotterdam, the Netherlands. The image was acquired with an ICEYE SAR satellite in the Spot imaging mode.”

“Daily imaging from ICEYE shows stockpiles being adjusted and transferred at the port of Rotterdam, with near-by cranes interacting with vessels.”

“Daily imaging from ICEYE shows that cars are parked alongside a road in Rotterdam port during weekdays, but not on weekends.”